DC-STIMULATOR PLUS - Stimulator for neuroscientific research

The DC-STIMULATOR PLUS is a stimulator for use in scientific research that provides a stimulation with weak currents, either direct or alternating, (transcranial Electrical Stimulation tES), within non-invasive Interventional Neurophysiology. The electrical charge and current density applied through a constant current source are far below the threshold for releasing a stimulus. Depending on the duration, the used current, the current density, and the frequency the stimulation has a modular effect on existing neuronal elements by either activating or inhibiting cortical activity.

Specification of the DC-STIMULATOR PLUS:

The DC-STIMULATOR PLUS is a micro-processor-controlled constant current source. It meets the highest safety standards thanks to (hardware- and software-based) multistage monitoring of the current path. By continuously monitoring electrode impedance it can detect insufficient contact with the skin and automatically terminate stimulation. This is a reliable method of excluding any injury to the patient. 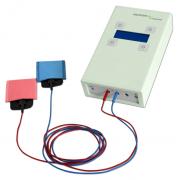 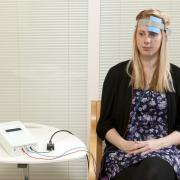 Schedule mode to set up a treatment schedule for your patient

The study mode encodes sham and active stimulation using one out of 200 5-digit codes. There are four settings available to meet even complex study conditions. The parameters can be set individually. As long as the study mode is enabled, only the study manager can change the parameters.

The DC-STIMULATOR PLUS can be extended with filter boxes and cables for operation within an fMRI scanner. This optional module allows artefact-free MR images even during EPI sequences. The module has been tested for 1.5 and 3 Tesla scanners.

Signal Out for EEG measurement during tACS / tRNS

Signal Out allows you to track, analyse and process the voltage waveform the DC-STIMULATOR PLUS sends out to external devices. In combination with our EEG-system NEURO PRAX® TMS/tES you can measure online-corrected EEG signals even during tACS/tRNS. This is unique worldwide.

The REMOTE mode enables you to operate the DC-STIMULATOR PLUS externally controlled by a voltage supply source. The generated current follows proportionally to the applied voltage. Hereby - voltage source and the output of the constant current source are galvanically isolated.

When the trigger in module is enabled, the selected stimulation setting can be started via a voltage impulse. So several stimulators can be operated simultaneously or a stimulation can be triggered by a defined event.

In the modes „Sinus“ and „Pulse“ the stimulator provides a signal which is coherent with the signal of the stimulation. The signal is galvanically isolated from the voltage source and can be processed by external software.

Here you will find our posters and brochures on neuroConn solutions for special neuroscientific research tasks.

Further details and technical data of the DC-STIMULATOR PLUS can be found in the product brochure:

DC-STIMULATOR PLUS EU declaration of conformity

For price enquiries, please contact us for a quote on any of our technologies: