A research team in Germany publishes strongest level of evidence to date for neurofeedback as a valid intervention of ADHD in children.

Tübingen, GERMANY
The largest study on the effects of neurofeedback on children with ADHD has recently been published in the academic journal Frontiers in Human Neuroscience.  The milestone publication systematically explored data from five different research centres in Germany as part of a registered clinical trial. With a total sample size of 144 participants the study is considered to have the strongest level of evidence to date supporting the efficacy of neurofeedback as a valid intervention for ADHD.  The study specifically looks into the effects of “slow cortical potentials” (SCP) neurofeedback , compared to a semi-active control condition of EMG-feedback (muscle movement), in children with ADHD.

Although previous studies on neurofeedback demonstrate the efficacy of this therapy, findings have often been argued to be unsubstantiated due to lack of sufficient control conditions. In the past, the nature of recording EEG and modulating brain activity has made it difficult to conduct double-blind controlled placebo studies with participants quite quickly recognising being assigned to the sham condition.

For the purposes of creating a controlled condition, researchers and engineers from neurocare in Germany assisted the study in customising the software of the biofeedback systems used to record EMG signals for the control group.  Led by Klaus Schellhorn and Dr. Falk Schlegelmilch, neurocare’s R&D team in Ilmenau developed an algorithm for the biofeedback control condition in close collaboration with the University of Tübingen and the Zentralinstitut Mannheim. Klaus Schellhorn, neuroConn’s founder and CTO of neurocare group was pleased with the contribution made by his team to this landmark study:

“One of the main challenges for the team was to develop and implement a control condition which is similar to SCP neurofeedback training but without the subject detecting obvious influence of their muscle movement. With the help of Dr. Schlegelmilch we were able to create an algorithm realistic enough for the researchers to successfully mimic the trials in the controlled condition.”

Results showed that the majority of participants (52%) responded in a meaningful way to SCP neurofeedback as opposed to 35% of the EMG control condition.  Furthermore, these positive results were recorded in 25 sessions – a relatively low number than normally adopted in clinical practice.  The study is also the first to systematically track side-effects of neurofeedback with only 6% of participants reporting quickly reversible headache, skin reaction, muscle pain or nausea.

Leading the study together with Prof. Martin Holtmann, Dr. Ute Strehl from the University of Tübingen was satisfied the findings demonstrate to the scientific and medical community that neurofeedback can be legitimised as more effective than a controlled condition.
"The most important finding is that neurofeedback is more than just a placebo,” she said.

Dr. Martijn Arns (not involved in the study) from Research Institute Brainclinics, and CSO of neurocare group, supported the findings:

“This is the strongest study to date demonstrating efficacy of neurofeedback treatment in ADHD. The response rate and effect sizes reported for neurofeedback are very encouraging and are close to those seen with pharmacological treatments in ADHD such as methylphenidates, with the appealing aspect that neurofeedback has lasting effects.”

The study applied the specific protocol of “slow cortical potentials” (SCP) neurofeedback, a type of training on event related potentials.  You can find more information on the technical requirements for administering SCP neurofeedback on neuroConn's product portfolio.  To gain access to scientific publications related to this protocol, or to find practitioner training courses, visit the neurocare academy website. 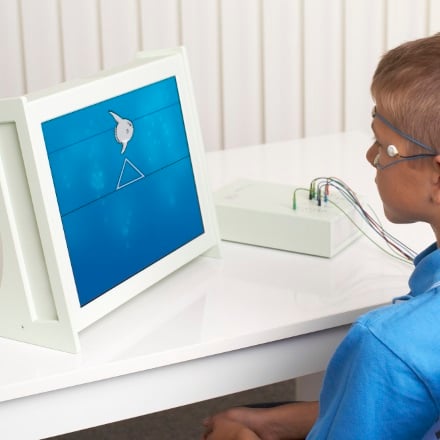 Neurofeedback is a type of computer assisted therapy which measures brain activity via electrodes placed on the scalp, with activity then visualised on a monitor.  This allows a person to learn how to control brain activity in response to the computerised feedback. Over a gradual learning process, the brain is rewarded for changing its activity to more appropriate patterns. The therapy is commonly applied by psychologists in the treatment of ADHD and sleep disorders.