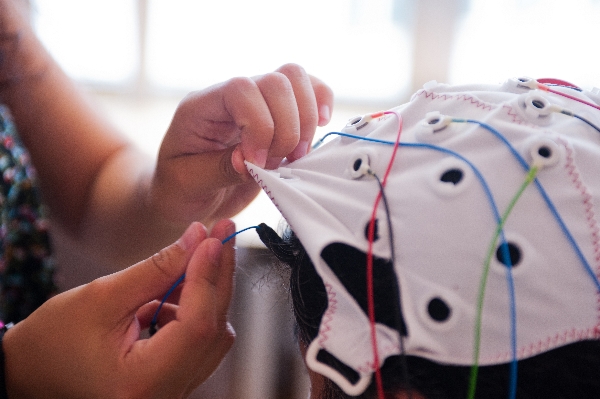 An international group of researchers including researchers from Research Institute Brainclinics and Utrecht University published results from the international multicenter  iSPOT-D study (international Study to Predict Optimized Treatment in Depression). This study recruited 1008 patients with a depression who were randomized to three different commonly used antidepressants and 336 non-depressed individuals. The researchers measured brain electrical activity, also called EEG or QEEG. When looking at differences in brain activity between depressed patients and controls, only small differences were found, not suitable for diagnostic purposes. However, most analyses suggested qualitative differences in brain activation patterns for males and females with depression (see box on the right), where males with a depression had decreased ‘alpha’ brain activity on the back portion of the brain, and females had increased ‘alpha’ brain activity on the frontal part of the brain.

The main aim of the study was to investigate if brain-based ‘biomarkers’, such as QEEG could predict treatment response. This study demonstrated that using a single biomarker – namely frontal alpha asymmetry – was able to predict treatment response and remission to escitalopram and sertraline (both belonging to the class of SSRI’s) for females only. This biomarker did not differ for the SNRI venlafaxine-XR nor for depressed males. A simulation demonstrated that when using this single biomarker to guide patients to an SSRI vs. an SNRI based on their individual brain activity, remission rates would have increased from 46% to 60% (an effective improvement in remission rate of 30%). “… the most surprising and promising aspect of this study is that the individual depressed patient can now be guided towards the most suitable treatment with a substantial improved chance for remission…’ said Martijn Arns, first author on the study. When replicated, this biomarker – possibly used in conjunction with other biomarkers identified in the iSPOT-D study – could help assist in the future of Personalized Medicine, where biomarkers are used to objectively guide patients to the right treatment.

Note: This study was sponsored by Brainresource Ltd. But data-analysis and reporting were unconstrained. Also see: http://www.brainresource.com/personalized-medicine/biomarkers

As another key step towards its planned public listing, neurocare is very pleased to announce the closing of a...
Read More

4 Signs of Burnout: what to look out for before it becomes a problem

4 Signs of Burnout: what to look out for before it becomes a problem.
Read More