At 10 years old Johan was diagnosed with ADD and dyslexia and found it hard to fall asleep at night. Johan and his parents have shared their story.

Respecting the privacy of our clients, names have been changed. 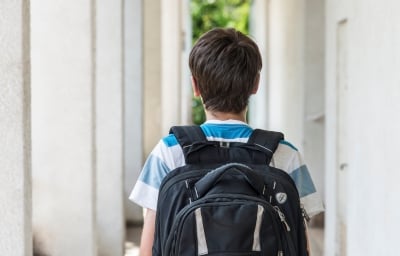 Our son Johan is 10 years old and is a big kid! Johan never liked school, even when he was little in kindergarten. Most mornings before going to school he complained about having a sore stomach, that he was feeling sick and he  would often cry because he did not want to go. At school he wasn't able to concentrate, he would feel low and found it hard to work even though his test results were quite good. Johan found it hard to sit still and always had a tendency to play around and disrupt other children. If there was any disagreement with the other kids he would sort it out with his fist but afterwards he would feel very bad and would deeply regret his behaviour. He had very low self-esteem. In the fourth grade we once had a parent-teacher interview and the teacher asked us if Johan sleeps enough at night. We told the teacher that he always went to bed on time, even on the weekends. By the end of the fifth grade we realized Johan would only lie in bed with the light off but did not manage to sleep and would toss and turn because of the "cogs in his head".

Because of Johan's attention and behaviour problems, and his difficulty with reading, at the end of the fifth grade we had him psychologically tested where he was diagnosed with ADD and dyslexia. It felt like the pieces of the puzzle were in place and Johan was also relieved by the diagnosis. We then started looking for solutions. Through an employee of the public health service we heard about neurofeedback and did more research online. It seemed like neurofeedback practices were growing out of the ground like mushrooms, we then started looking for a reliable clinic. We then found neuroCare (formerly Brainclinics) because they do research in collaboration with the Radboud Hospital in Nijmegen. It was also possible to do tele-neurofeedback with the clinic in Nijmegen, which was convenient for us sas it saved on travel and parking expenses.

Johan has had about 30 training session, 2-times a week. Sometimes he was able to do it during school hours. During this period he was very motivated and worked hard because he also had a good relationship with the therapist who was great at working with him. At first we did not notice much difference even though the sessions took out all his energy. In the end though, the results were overwhelming! It now only takes 15 minutes for Johan to fall asleep whereas before it took almost an hour. This might explain why he doesn't feel so bad in the mornings.

At school he is now able to manage (almost) all the tasks and in the Autumn holiday we were able to do more things which he wouldn't have been able to do in the past. Johan can discuss his problems a lot more easily now so it doesn't quickly come to a fight anymore. We now have a son who is confident and sincere and finds it much more fun to go to school. The cost and time invested was well worth it.

Hello everyone,
I'm Johan and I'm 10 years old. I started doing neurofeedback in the Autumn of 2009 at Brainclinics. The first five times we went to Nijmegen it was a long car ride and it was boring. But then we did the training two times a week at home and then one time a week in Nijmegen. It was great cause I sometimes got permission to leave early from school. In the beginning I was very tired watching the bar on the screen but I got better at it. In the session I was always happy because I worked hard but also we made jokes. I got to earn stickers and put them on a chart and then after five stickers I got to choose a present from the box.

Before I did the neurofeedback training I found it difficult to:

After doing neurofeedback I can now: 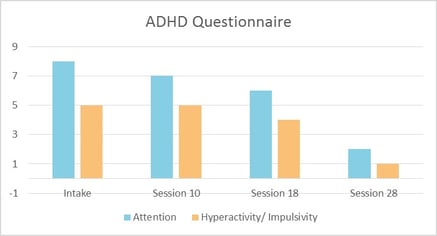 Here are the scores for the client’s PSQI (a sleep questionnaire) during neurofeedback sessions. A score of 6 or higher is considered to be a sleep problem. Below are the client’s Quick Assessment scores which assess 30 complaints rated on a scale of 0-3 by the client and the parent(s). For price enquiries, please contact us for a quote on any of our technologies: